And the Award Goes to… Mike Marino: Chicago Studio Artist of the Year 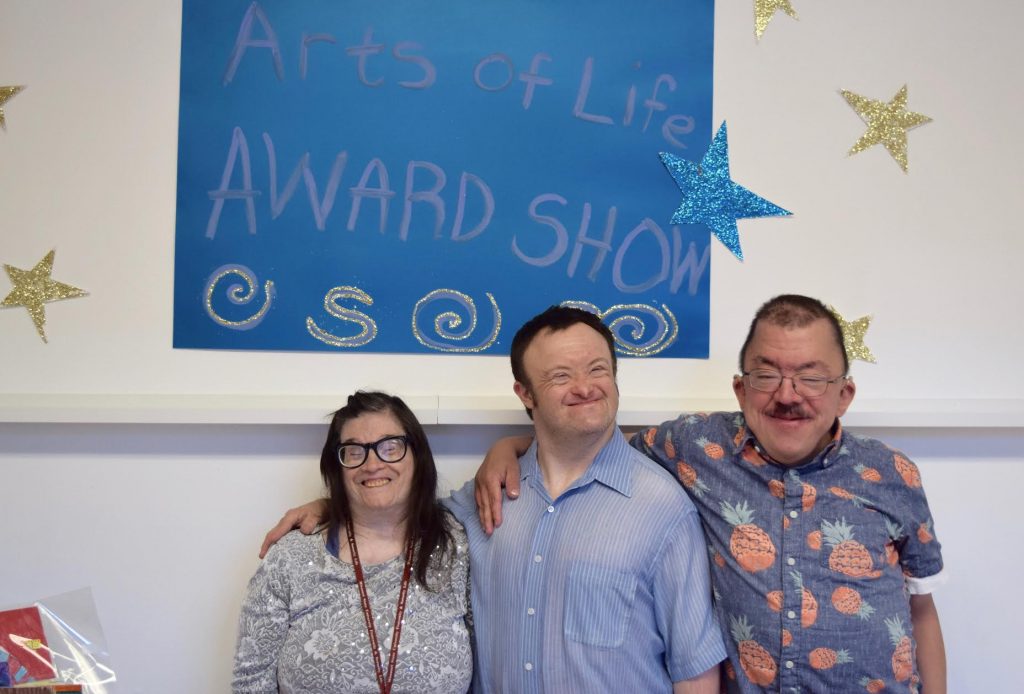 The Chicago Studio held our 2016 Awards Show on October 14.  Artists, staff, and friends got dressed up for food and fun, and this annual celebration of each artist’s unique skills and talents.  This year, Mike Marino was named Artist of the Year, a contentious award that is presented to artists who have both a strong arts practice and leadership roles within the studio.   Mike has worked at The Arts of Life since 2006, creating varied work using a number of media.  “Well, I made some windows back then and comics now,” Mike said.  “Mostly I use sharpies and outline.  I use paint.”  For his current interest in comics, Mike draws on other artists’ work for inspiration.  “What inspires me?  When I look at stuff like comics, not comic books, but comic movies that inspires me to make my own comics,” he said.  “When I watch something on YouTube, like I know I have a goal for art history, that also inspires me.” Mike was selected as Artist of the Year for his consistent practice, for being a great role model and helper in the studio, and for his willingness to develop new relationships with other artists in the Chicago community.  In the past year, Mike enrolled in an eight week long art course at a nearby community print shop and studio.  “I took a comix class with Catherine Norcott at the Spudnik Press.  It was a comix class for other artists to do about their life stories to make comics.  They teach me how to use the ink on a comic, not just pencil.  They showed me how to outline.”  Mike’s work is usually very colorful, but for this class he also worked hard to develop dynamic images in black and white. As it neared the end of the awards show and was time to announce the final award, Mike began to realize he was being named Artist of the Year.  As our Studio Manager, Catie, began to explain the history of the award, Mike raised his right hand and pointed three times to himself.  The crowd burst with laughter.  “Well at first, I didn’t know I was going to get the award this year,” he said.  “I didn’t know I was the artist of the year.  I was surprised when Catherine called my name at the end of the Awards Show.  I think it felt great too.  My mom came, everybody from outside The Arts of Life came.  I think they felt good.” Congratulations, Mike!  We are so glad you are a part of our community.  Keep up the hard work.