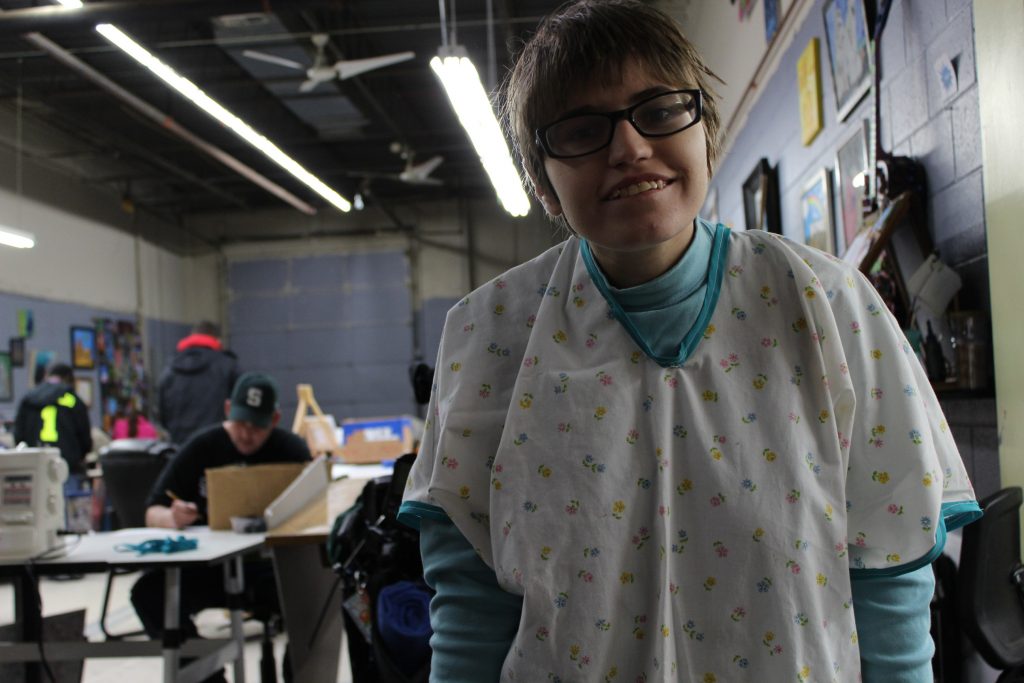 The impulse to paint comes neither from observation nor from the soul (which is probably blind) but from an encounter: the encounter between painter and model: even if the model is a mountain or a shelf of empty medicine bottles.”  ? John Berger, The Shape of a Pocket Renata Berdes harnesses the experiences of her daily life, becomes enamored with them, and enters the studio with the desire to recreate what she obsesses over. Often, the traits that attract Berdes’ to these objects or experiences elude her, but the impulse is inescapable. Working in cycles, she rapidly creates a series of related pieces before moving onto another subject matter. Later, when something reignites her interest, she will return to a previous cycle to add to that body of work. If an artist is an archivist of their times and experiences, Renata Berdes is an archivist of the objects she holds dear. The Aquatic CycleThe first love I encountered was Renata’s series of aquatic sea life. These images have a cubist quality, depicting the animals in profile but carefully includes all parts of the animals. Fins normally hidden protrude from the top, both eyes appear on the same side. A fish takes on the shape of a four pointed star. The background is a flat cerulean with fish painted boldly and brightly. With unclean and wavering edges, Renata’s paint carves out its territory, contrasting the smooth color field behind it. These fish are then outlined in thick black resulting in caricatures of sea life fastened and stationary to a graphic blue.  [[{“fid”:”11087″,”view_mode”:”media_original”,”fields”:{“format”:”media_original”,”field_file_image_alt_text[und][0][value]”:””,”field_file_image_title_text[und][0][value]”:””},”type”:”media”,”link_text”:null,”attributes”:{“height”:2684,”width”:3950,”class”:”media-element file-media-original”}}]]The Obsession Cycle            The second body of work that Renata is building contains objects that are important to her. These objects are not what would typically be thought of as precious or meaningful. They are: hospital beds, glass shower doors, bed rails, and sliding mirrored closet doors among others. These pieces are painted in the same bold and bright manner as her aquatic pieces, but done on the largest scale available. These recreations mimic the characteristics of the objects as best as the materials at hand allow. For example, layering and burnishing metallic HVAC tape she depicted mirrored sliding doors. Renata’s intentions appear to be replication–employing projectors to insure the scale is proportionate–but her execution is hurried and hap-dash as if she is releasing something from within herself and cannot set this idea free fast enough.  [[{“fid”:”11088″,”view_mode”:”media_original”,”fields”:{“format”:”media_original”,”field_file_image_alt_text[und][0][value]”:””,”field_file_image_title_text[und][0][value]”:””},”type”:”media”,”link_text”:null,”attributes”:{“height”:1938,”width”:1430,”class”:”media-element file-media-original”}}]]The Object Cycle            Most recently, Renata has begun to sew objects and work in three dimensions. Her first project recreated a hospital gown. As soon as it was possible, Renata wore the gown around the studio as if it were a lens through which to experience the day. Now she was able to inhabit the same physical space, allowing Renata a more intimate interaction with the object she adores. Since then, she has create a stuff dachshund (matching her dog at home), and recreated a Peep stuffed animal in brown fleece instead of pink. [[{“fid”:”11091″,”view_mode”:”media_original”,”fields”:{“format”:”media_original”,”field_file_image_alt_text[und][0][value]”:””,”field_file_image_title_text[und][0][value]”:””},”type”:”media”,”attributes”:{“height”:1728,”width”:2592,”class”:”media-element file-media-original”},”link_text”:null}]]             These cycles are not bodies of work that occur chronologically. Instead, Renata weaves in and out of their content continually building them up. Each piece feeds into the next. Sewing projects lead to paintings, trips to the ocean lead to aquatic pieces. Each continuation­ grows the archive of objects Renata holds dear finding meaning in the surroundings of each day. These various cycles document her perception in their own, nuanced, way establishing Renata as the archivist of her inner world.