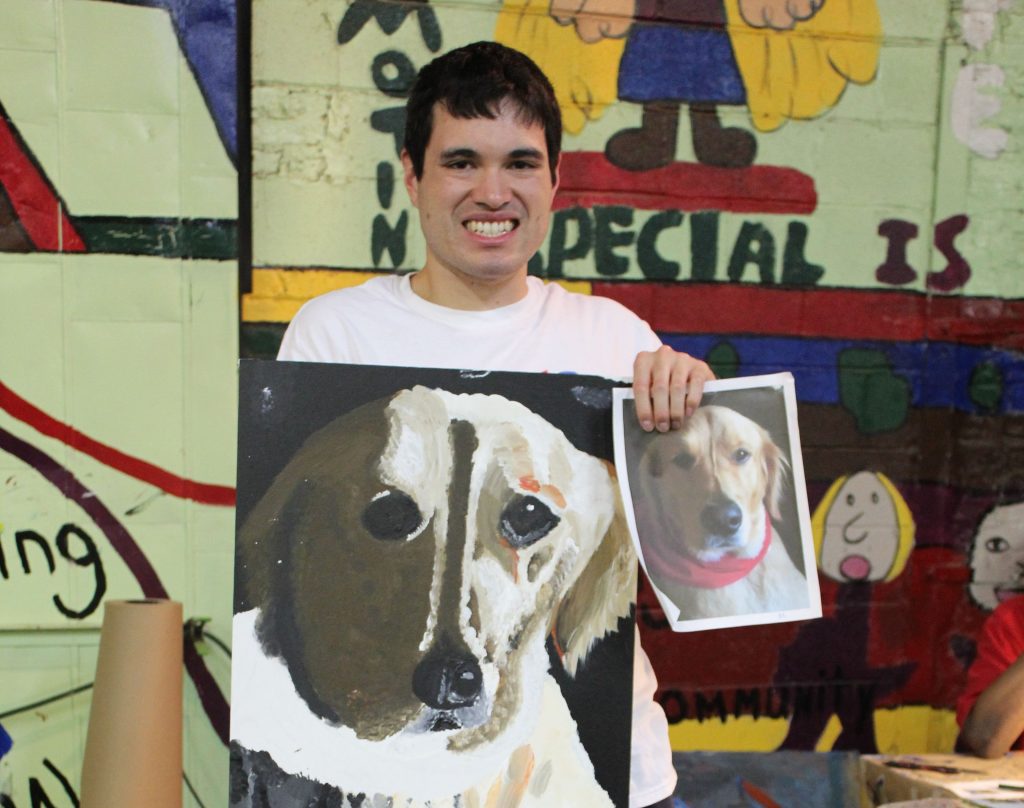 Tuesday, July 29, 2014I woke up at 7:03am. I weighed one hundred seventy-five pounds in the bathroom. Downstairs, I texted Dad (Richard Russell Conners, Junior) in the living room. I heated oatmeal by myself. The Dodge Grand Caravan number three eight nine four came at eight thirteen. On the Pace ADA Paratransit Service, I texted Ann Martha Zeller, Aunt Deborah Magee Yasutake, Joseph Takenori Conners, and Mom (Sandra Lynn Yasutake Conners).I arrived at Arts of Life Inc to see everybody at nine o’two and came to the cafe. I watched video clips of pet with everybody. I watched Pilot American Dad! on the black iPad with Joshua Albert Wykes and Walter Anthony Lazard. I read the Runner’s World by myself in the wellness room. I drew a still life with a dog from their house at the station in the studio. I came back to the cafe. I texted Elsie Luyun Han, Aunt Debbie Yasutake, Anthony Philip Zeller, and Ann Zeller. I took some pictures in the art studio. I came back to the cafe again. I texted Tony Zeller and Joe Conners. Katherine N. Norcott and Michael John Marino talked to us. We worked on jobs. I came to Sara and Emily Susan Smith’s office at one o’clock p.m. Sara Jennifer Bemer talked to me. Sara Bemer took my picture at the art station. I drew still life. I washed the paintbrushes in the restroom. I came back to the cafe some more and to Tyllie’s Barbosa Photography. On the minivan number three eight five nine, I texted Sara, Emily Ann Lyons, and Joe. I took a little bit of a nap by myself. In the midafternoon from the  van window, I saw some objects from years ago. I arrived back home at three forty-seven. In the late afternoon and afterwards, I watched a video of their party from their house in California in the basement. In the late afternoon/early evening in our classic silver metallic Toyota Prius II, I texted Emily Lyons, Elsie Luyun, and Cara Zeller. Mom parked our hybrid hatchback by Fit Code Bootcamp and I went with Mom (Sandra Conners) to Running Excels to meet everyone. I stretched my arm.In the evening, we ran to Starbucks Coffee and Walgreens. I finished six point zero seven miles. My running time of forty-six minutes, seven seconds, and twelve centiseconds. I went back to Running Excels at six fifty-five. I stretched my leg. Mom and I went back to our parked classic silver metallic hybrid hatchback by Fit Code Bootcamp at seven twenty-two. I talked on my silver/white cell phone with Dad (Rick Conners, Junior). I texted Heidi Elizabeth Zeller, Ann, and Emily. Mom and I went back home. I played Blendoku in the living room. I heated some food. Mom, Dad, and I talked on a Face Time with Aiyla Miyui Zeller and Cara Miwa Zeller. I played Blendoku again by myself.In the late evening, I made a strawberry ‘n peach smoothie. I took some pictures again. I played Blendoku some more. In the late-night evening, I washed the blender and gold lid. In the late-night and upstairs, I went to sleep in my room.