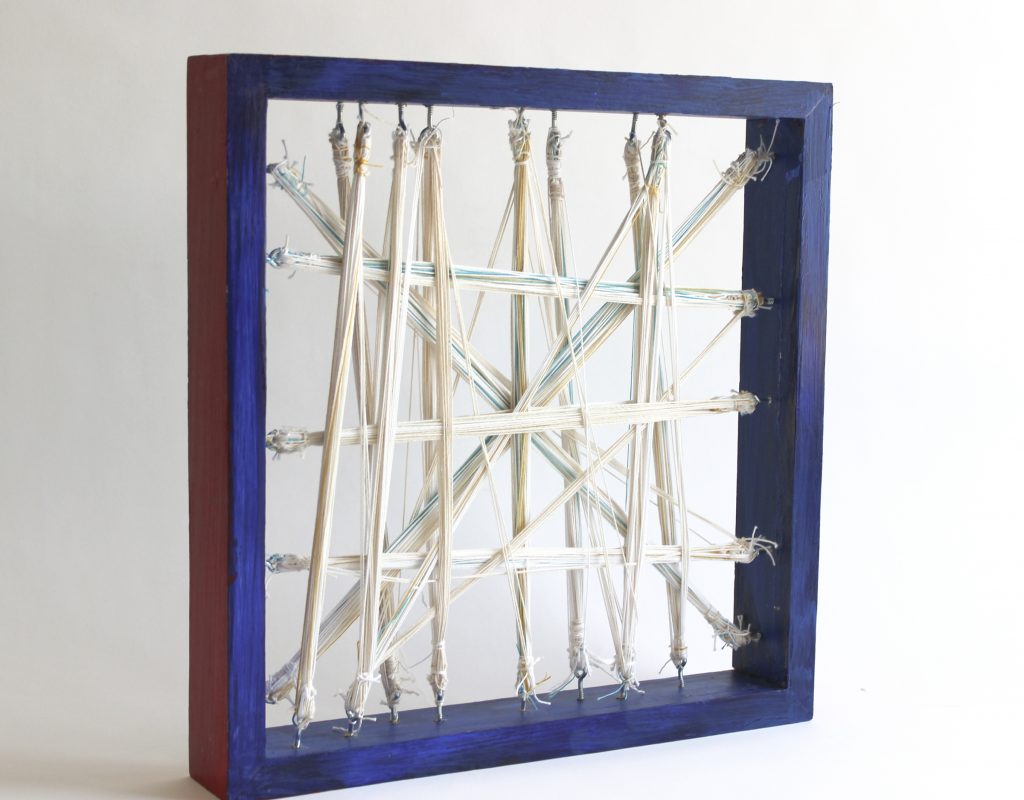 It’s a rare privilege to watch a fellow artist come into their own. The North Shore’s Phil Gazollo has shown us all what that looks like this year as he’s transformed from creative dabbler to driven maker. On July 8th, he was honored at our annual Awards Show with the Most Improved Award in acknowledgement of the many strides he’s made. Since July of 2013, Phil has been a staple at the studio, coming in twice a week to experiment with a wide variety of mediums and methods. He’s always shown interest in trying new things. “I do different projects… I don’t want to do the same projects all the time.” He’s doodled cartoon characters, covered a guitar with colorful bottle caps, designed beer taps. He’s enjoyed every project, but never settled into a rhythm or discovered a passion. Over the past 12 months, it seems as though the stars have aligned and Phil has finally found his creative voice. His new geometric paintings and weavings form a cohesive body of work and give Phil a clear path forward.  [[{“fid”:”12908″,”view_mode”:”default”,”fields”:{“format”:”default”,”field_file_image_alt_text[und][0][value]”:”Geometric Triangles by Phil Gazollo”,”field_file_image_title_text[und][0][value]”:”Geometric Triangles by Phil Gazollo”},”type”:”media”,”link_text”:null,”attributes”:{“alt”:”Geometric Triangles by Phil Gazollo”,”title”:”Geometric Triangles by Phil Gazollo”,”height”:366,”width”:652,”class”:”media-element file-default”}}]](Phil Gazollo’s “Geometric Triangles”) Phil has created geometric acrylic paintings off and on for years, interspersed with other radically different projects. But after being exposed to Piet Mondrian (Neo-plasticist using grids, perpendicular lines and primary colors) and Laszlo Moholy-Nagy (Bauhaus painter/designer interested in qualities of space, time and light), Phil began to understand that his fascination with geometric shapes was legitimate and had a historical precedent. Knowing what had come before seemed to empower Phil to further develop his ideas by focusing on geometric paintings.  The result was a cohesive series of canvases and painted cigar boxes.Perhaps in an effort to give his geometric paintings further dimension, Phil began another series that he refers to as “weavings.” When asked to describe these unique pieces, Phil said, “I make the frame with the weaving. It’s a square and I put hooks in it and then I put different colored strings on it in a zigzag design.” The resulting works often feel like elevated versions of his earlier paintings.[[{“fid”:”12911″,”view_mode”:”default”,”fields”:{“format”:”default”,”field_file_image_alt_text[und][0][value]”:”Weaving Design by Phil Gazollo”,”field_file_image_title_text[und][0][value]”:”Weaving Design by Phil Gazollo”},”type”:”media”,”link_text”:null,”attributes”:{“alt”:”Weaving Design by Phil Gazollo”,”title”:”Weaving Design by Phil Gazollo”,”height”:366,”width”:652,”class”:”media-element file-default”}}]](Phil Gazollo’s “Weaving Design”) Phil has always enjoyed the aspects of art making that involve building or assembling. In his words, “you can create with your hands.” Both his geometric paintings (which require the use of tape and ruler) and his weavings (which make use of hardware like eyes and nylon string,) appeal to Phil’s physical nature. He also enjoys incorporating found objects into his work, saying “You can make some beautiful stuff using old things… It’s so pretty.” Many artists find it hard to talk about their practice, but Phil is pretty direct about what brings him back to the studio week after week. “Art is interesting and pretty and makes you feel proud of yourself.” We are proud to bear witness to Phil’s creative growth.