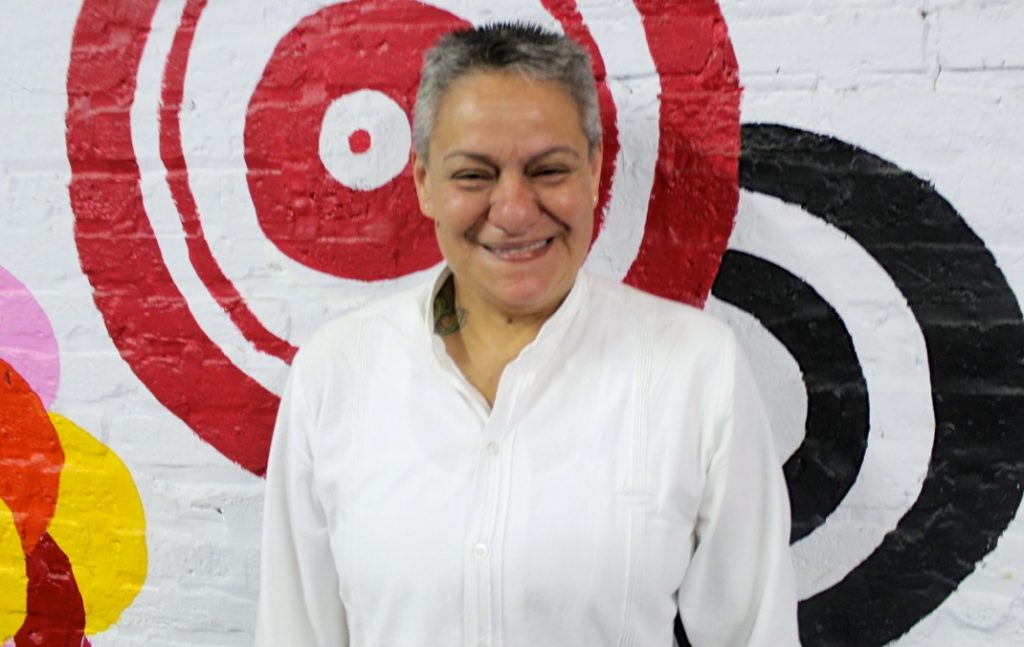 The Arts of Life partners together with ReEmployability, a company which allows individuals who have been injured on their jobs to transition back to work by volunteering at non-profit organizations. Employees are able to earn their usual wages while participating in the program. ReEmployability volunteers are often completely out of their element, and in part this is what makes the connection that they form with our community so extraordinary. Each has found value in their time at the studio, but for Maria Taboada in particular, the experience has been nothing short of life changing.For Maria, this experience has positively impacted her own life as well as the lives of the artists around her. Maria had faced a multitude of obstacles before finding refuge at the Arts of Life. She had been injured, idle, and depressed for four years before she came to us and finally began to heal. Having emigrated to the U.S. from Mexico, Maria was a cable technician until a hand injury and dispute with her supervisor left her without work and severely depressed. By spending time with our artists, Maria unexpectedly found a cure for what ailed her.“I was very depressed,” she says. “Before I was a strong woman. I liked to make things; I liked to work…but after this I didn’t do anything, and I felt like killing myself. Then they sent me here, and my depression is almost gone because I see these beautiful people and what they do.” After these experiences, Maria envisions a new path for herself. “Now I know what I want to do, while I am strong,” she states, “I want to go to school and study…psychology, because I love to be here and help the people.”Before coming to us at the Arts of Life, Maria had had limited experiences with people with disabilities. Though she hadn’t interacted with them directly, she says she always felt something when she saw a person with a disability on the street. “I wanted to be close to these people,” she explains. Now, she has learned much more about people with disabilities and has learned a great deal about herself in turn. “People have different problems,” she says, “But they find ways to be okay.” According to Liz, Maria is rarely intimidated and extremely observant. By asking for guidance but also taking initiative in her role, Maria has become extremely valuable both as a volunteer and a friend to the artists.  “She was drawn to those who typically get less attention from volunteers,” Liz says. In particular, Maria has had great success working with Chicago studio artist Carrie. “Maria makes working with Carrie more accessible,” says Liz. “Other volunteers want to work with her, because now they have an example.” “They’re the best friends you can have,” Maria says. Of her work with Carrie, she states simply, “I took my time with her. She’s a young girl. She wants to do her work…. She’s a smart woman.” Now, Maria hopes to help Carrie to be comfortable with everyone in the studio. And so, though her time as a ReEmployAbility volunteer is over, for Maria there is still work to build on at the Arts of Life, and she intends to come back to volunteer whenever possible. As she puts it, “I found the place I want to be.”-Krystyna Wazny