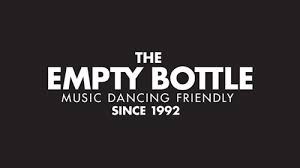 In 1992 the Empty Bottle started out as a cat-ridden hole-in-the-wall bar in Ukrainian Village (just south of Wicker Park) where you could get any one of nine beers for a buck-fifty or less, play pool for 50 cents, and find everything from Monster Magnet to Bill Monroe on the jukebox.
On Halloween of 1993, it moved two blocks up the street and threw open the doors to our new, sound-equipped, slightly larger hole with three nights of great shows, culminating with a SCRAWL performance that could have been a scene out of ?ÛÏCarrie.?Û
They’ve done a bunch of shows since then; in fact, they?Ûªve been anythingåÊbutåÊempty these last 20 or so years, thanks to the same low prices, lack of attitude, and dedicated regulars that made the original bar such a success.